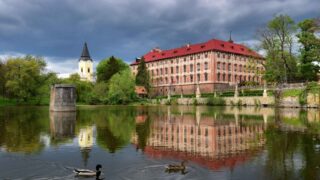 The Libochovice chateau is under the administration of the National Monuments Institute, a territorial monument administration in Prague. On January 1, 2002, it was declared a national cultural monument.

The town of Benesov nad Ploucnici, located in the Usti region, hosts a complex of 7 buildings, including two Renaissance chateaus.

In total, The Regional Museum in Decin manages more than 220,000 collection items, mostly of a regional nature.

The Regional Museum in Most has been collecting historical, scientific, and artistic collections with an emphasis on the wider Most region.

The Regional Museum in Teplice specializes in the archeology, history, and nature of northwestern Bohemia.

Zubrnice Open Air Museum is the only museum in northern Bohemia which presents the housing, culture and connectivity of the original inhabitants.

The District Museum in Louny collects objects that are primarily related to their region, like for example collections of historical photography or numismatics.

In the Glass museum you can find a glass chair made by the Elias Palme company in the last decade of the 19th century for Maharaja’s Palace in Hyderabad, India.