This audio program serves as an educational talk show, focussed on the Czech Heritage. Our hosts are talking about the Heritage of Bohemia, Moravia and Moravian-Silesia. You can learn about Czech History, Culture and Language. Enjoy our special lessons and start learning now!

If you do not see the player, then check and activate JavaScript in your browser. We recommend using the latest Google Chrome.

If you do not hear anything even if the player is playing, then check your sound settings and internet connection.

If you do not want to be interrupted with popups while listening to this music program, then consider becoming a member and support our nonprofit projects.

Katie Schon lives in the Dallas area in Texas. She grew up in Ennis, a small Czech town in North Texas, dancing polka and eating kolace. She studied Czech Language and Culture at the University of Texas at Austin, and spent two summers abroad in the Czech Republic, as well as some time after college. She hopes a 4th trip is in the near future. Katie is currently living in a tiny house that her husband built and homeschooling her 2 children. She is helping Czech-American TV as Dubbing + Proofreading Manager and Host of the Cultural Audio Program. 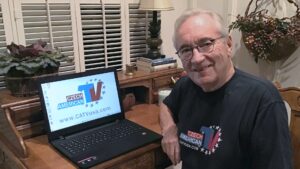 Joe Mraz was born in Chicago and raised and educated in the suburb of Berwyn Illinois. He attended the Chicago Academy of Fine Art and the American Academy of Art in Chicago. After graduation he worked in advertising in Chicago and New York. He is retired now and lives in Longview, Texas. Where he teaches watercolor painting and conducts workshops for artists. His interest in Czech traditions, heritage and Czech food comes from his grandparents who emigrated from Pilsen (Plzen) and Prague (Praha) during the late 1800’s. He hosts several audio programs on CATV USA.

If you want to become a partner of this page, contact us at the link below.