Discover Czech Regions: The Usti Region in other respects, experience an alteration ! The region offers a wide range of options for cycling enthusiasts. A cycle path that runs along the banks of the River Elbe is available for recreational cyclists, while more demanding sportsmen and women can conquer the local hills.

Interesting Czech Facts: A canyon valley called Porta Bohemica – the Bohemian Gate. The miracle of the Porta Bohemica formation occurred in the Tertiary, by rocks being lifted across the original flow and in the early Quaternary, when the river had to cut its way through again. As a result, remarkable countryside with deep cuts into the Bohemian Uplands was formed.

Czech Landmarks: Decin Castle was established as the Premysl’s castle with a four-wing layout and a residential palace. It served as the residence to the royal burg-rave. After it was destroyed in the Thirty Years War, Marie Terezie had it rebuilt into barracks in 1750. Now the east wing is used as the city library with an internet cafe. Also, a ceremonial hall and nursing home are housed here.

Oparno Castle was not the only or even oldest fortified castle standing here. In a document dating back to 1276 there is a reference to Hradek which suggest that there used to be an old stronghold or castle standing here before this date. Oparno was constructed as a compact stone cylinder ended with castellation. There was no tower standing out from the castle complex, all the roofs of the internal buildings were hidden behind the wall and protected from direct gunfire. 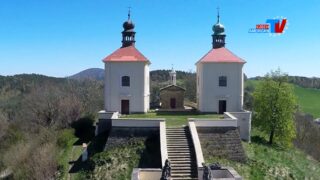 Rabstejn – In the middle of the 19th century the rock was used as building material for the cotton spinning mills that sprung up in this area. The exhibition located in one of the underground systems describes the history of the Rabstejn Valley. The labyrinths of the underground passages are 4,500 m long. The galleries were made by concentration camp prisoners towards the end of the Second World War in 1944-1945. 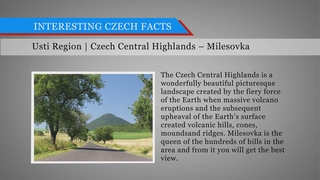 Interesting Czech Facts:  Milesovka is the windiest mountain in Bohemia. The Czech Central Mountains are the geologically youngest mountains in the north of Bohemia. 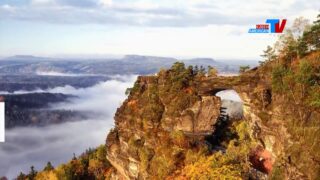 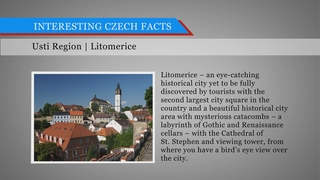 Interesting Czech Facts: Town of Litomerice is a town at the junction of the rivers Elbe and Ohre in the north part of the Czech Republic, approximately 40 miles northwest of Prague.

Exploring Czech Lands: Town of Decin is a base for tourists visiting the romantic Bohemian Switzerland area and is an ideal jumping off point for recreation in the German border areas as well. Tourists and visitors are drawn to the area by its fantastic natural beauty. Decin is blessed with an abundance of unique natural landmarks. 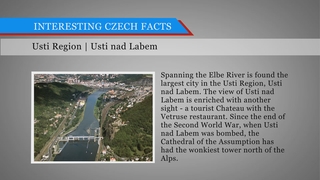 Interesting Czech Facts: City of Usti nad Labem is conveniently situated in the Elbe valley in the area of Czech Highland and in its close neighborhood many natural beauties can be found. Forty percent of the city area is situated on the territory of natural preserves Czech Highland and Elbe Sandstones and on the territory of the Natural Park Eastern Erzgebirge are in its neighborhood.