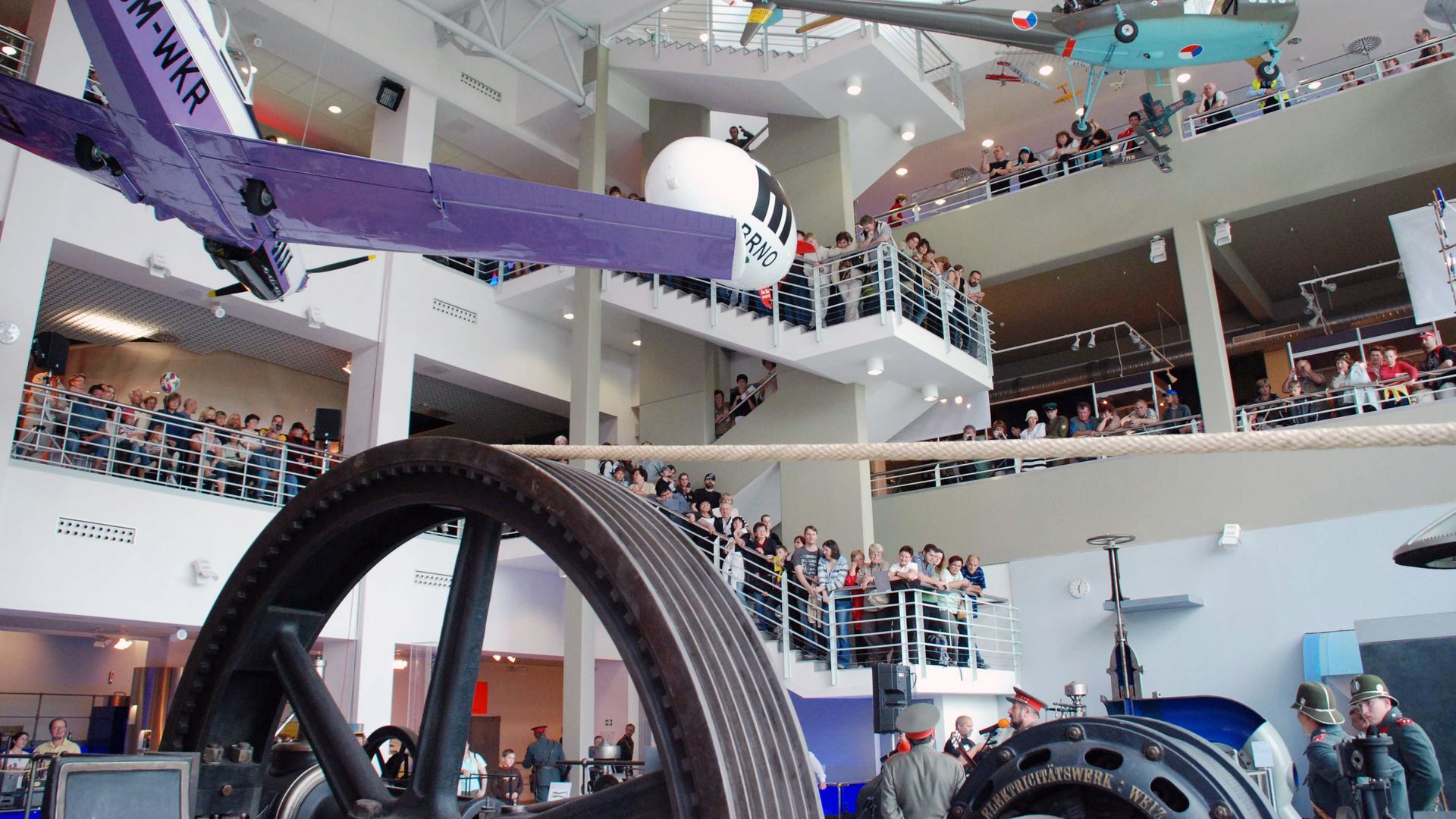 The Technical Museum in Brno deals with the history of technology. In the expositions in the main building, you can view objects of historical value, from clock parts to aircraft engines.

Moreover, you can “travel in time“ – in Crafts Alley, you’ll find yourself in the 1920s and 30s. The atmosphere of interwar Brno is complemented by shop called a colonial, with a coffee roasting room, dental surgery, pub and the tenement house itself. You can also take a peek into the workshops of a clockmaker, bookmaker, locksmith, tailor and shoemaker.

In the neighboring Mechanical Music Parlor exposition, you will see unique mechanical music machines made with precision clockmaking and artistic-woodcarving work, such as automatophone-barrel organs, nail music machines, orchestrions, player pianos and others.

The Steam Engines exposition, on the other hand, presents large steam engines, a steam locomotive, turbines, and machines used in Moravia at the turn of the 19th and 20th century.

For motorsport lovers, we‘ve exhibited historical vehicles from the production of prominent Moravian manufacturers such as Tatra Kopřivnice, Zbrojovka Brno and Wikow Prostějov, complemented by the contemporary workshop of a medium-sized private entrepreneur from the 1930s. Here, you can also see cars from the real socialism period – Škoda, Tatra, Žiguli, Trabant, Volha etc.

In the other expositions, you can get acquainted with the history of optics, the development of computer technology, from ancient times to mainframe computers, an ironmonger’s shop and aircraft engines.

Thematic expositions, which reflect discoveries, inventors and anniversaries from our past, also take place in the museum.

An integral part of the museum is the Technical Games Room, which will captivate both young and adult visitors. It explains various laws of physics, and their technical applications, in a fun, interactive form.

Workshops for the general public are organized on weekends.

During the year, the museum hosts events such as Children’s Day and Christmas Advent.

Automotive Technology Day – this will be a drive for which the museum opens a depository of transport vehicles and military technology to the public. The museum also organises events at its monuments where visitors of all age categories will get their money’s worth.

The museum manages six monuments outside Brno, located from the Slovak border to Vysočina, of which three hold the title of National Cultural, Monument – the Water Mill in Slup, the Windmill in Kuželov and the Old Ironworks near Adamov. Other TMB monuments are the Baroque Smithy in Těšany, the Šlakhamr in Hamry nad Sázavou and the Czechoslovak Fortifications and Iron Curtain Complex in Šatov. The monuments are accessible from the spring months to autumn.

For more information about the South Moravian region, from which this museum comes, click here and here.