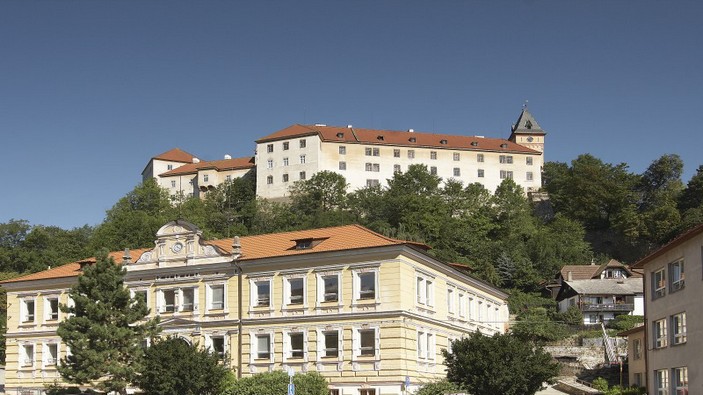 Vimperk Chateau was founded as a castle on the site of an ancient settlement by Purkart of Vrchotovy Janovice, the burgrave of Zvikov, in the second half of the 13th century. It is situated on a promontory above a valley of a brook along which a long-distance road to Bavaria ran. The outer part of the chateau complex is entered through a gate, via an extensive yard with 17th century out-houses (e.g. a brewery) and two fountains. The courtyard is enclosed by two-storeyed buildings, partly also by column-supported arcades, and with the chapel of St. Joseph rising above the rest of the buildings. The very tip of the promontory, formed of rock, supports the 13metres Vlcek tower from the second half of the 13th century. First floor is dominated by Gothic portal from the 15th century, on the ground floor there is a cross vault supported by a column in the centre. The Haselburg fortress is situated to the south-east of the chateau, with fortifications around it.