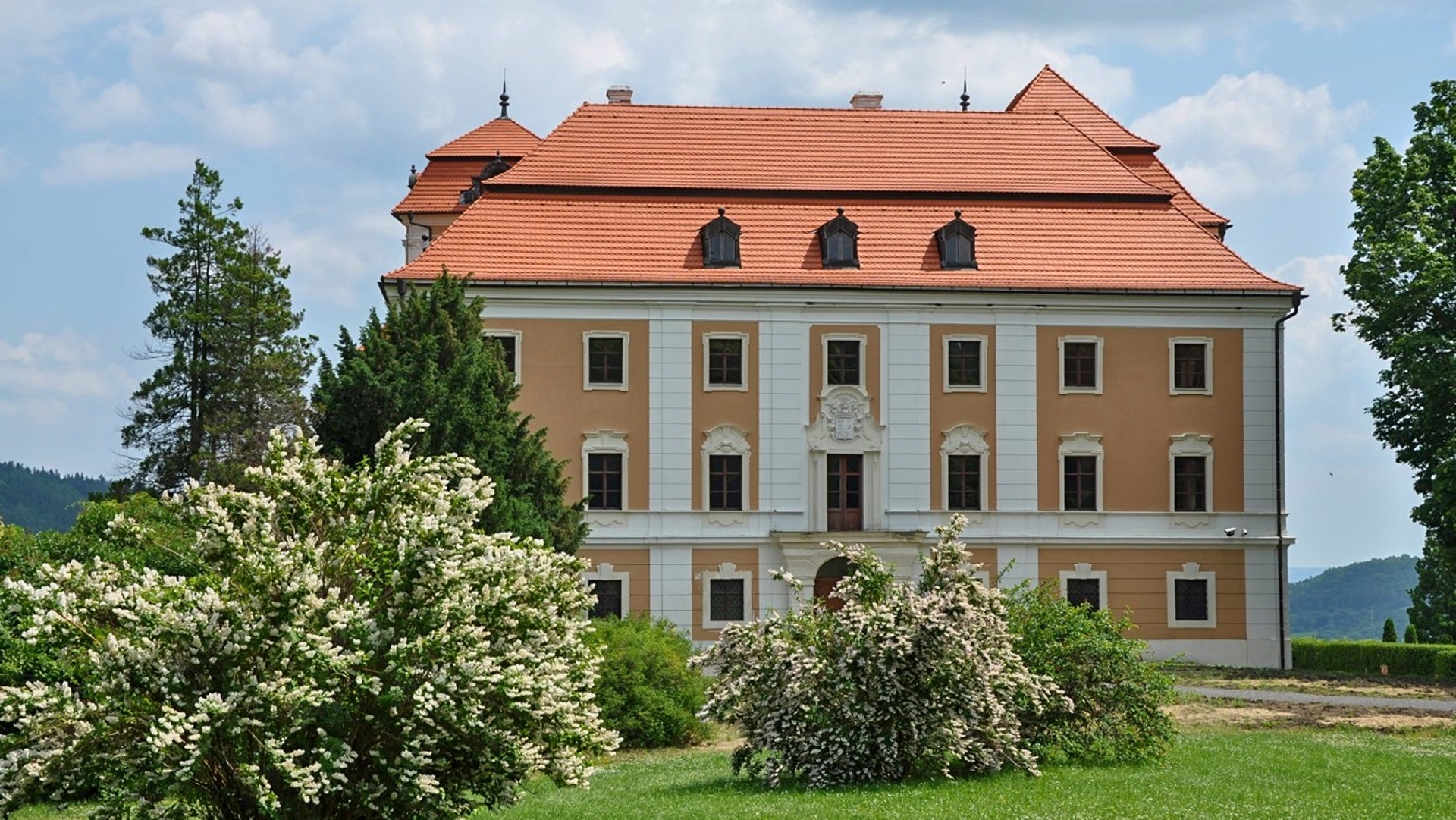 We can find the chateau in the Karlovy Vary region, in the town of Valec in the foothills of the Doupovske hory. First references to Valec Chateau are from 1358, when the manor was divided between brothers – Ctibor and Benes from Valec. Thanks to royal subchamber Jakub Kyspersky from Vresovice who rejoined and modified the manor in the late Gothic style. In 1514, Valec received city rights from Vladislav II at Jakub‘s request, and in 1526, the Valec was officially called “Chateau Valec”. Jakub Kyspersky died the same year in battle of Mohacs , and his descendants sold Valec to Hugo from Leisneck. In 1538, the chateau belonged to Vilem Hasistejnsky from Lobkovic due to marriage. In 1570, Krystof Stampach, with his son Vaclav from Stampach, bought and rebuilt the chateau in the late Renaissance style. His attendance on the uprising against the Habsburgs forced him to escape the country and his property was confiscated.

In 1623, Barbora Stampachova from Poutnov bought back the manor from the Imperial Chamber. She was catholic, and that’s why she was allowed to return to the country. In 1694, her grandson Jan Krystof Kager owned the manor, a single man from Stampach. He rebuilt the chateau, the chateau park, and the entire manor with major artists and architects of their lifetime. The designer of the baroque rebuilding was Italian Francesco Barelli, whose successor was Giovanni Antonio Bianno Rossa. Jan Krystof Kager died in 1721 and his nephew, Jan Ferdinand Kager from Globen, inherited this manor from him, and he also continued to rebuild it. After his death in 1723, Jan Krystof Tyll, son of a carver from Lochotin, succeeded him as the new owner. In 1745, Karel Josef August Kager from Globen and Limburg-Styrum inherited the manor. His minor daughter Marie Josefa inherited the manor next, and it was managed by her mother, Marie Alzbeta, maiden name the Marchioness Laverne. In 1797, Marie Josefa married Josef from Argentau d’Ochain and sold the manor to Jan Antonin Pergen from Pergen.

In 1798, Jan Gottfield Korb from Weidenheim bought the manor. And from him, his son Franc bought the manor for 400,000 gulden. In 1847, his son Karel owned the manor, and he renovated the chateau in the Neo-renaissance style. His heirs sold Valec in 1890 to Earl Vincent Thurn Valsassin, who again rebuilt the manor in the Neo-renaissance style. In 1937, Thurn sold Valec to the doctor Jan Larisch-Monnich, whose property was due to Benes decrees being confiscated. After the first World War, the chateau became, for a short period of time, the sanatorium for war veterans, and in the 1950s, an asylum for Korean children. For a long time, it became a children’s home. In 1976, the chateau was set on fire and its renovation has lasted until the current time. After the devastating fire, the chateau became the property of the National Heritage Institute.

For more information about the Karlovy Vary region, from which this castle comes, click here and here.