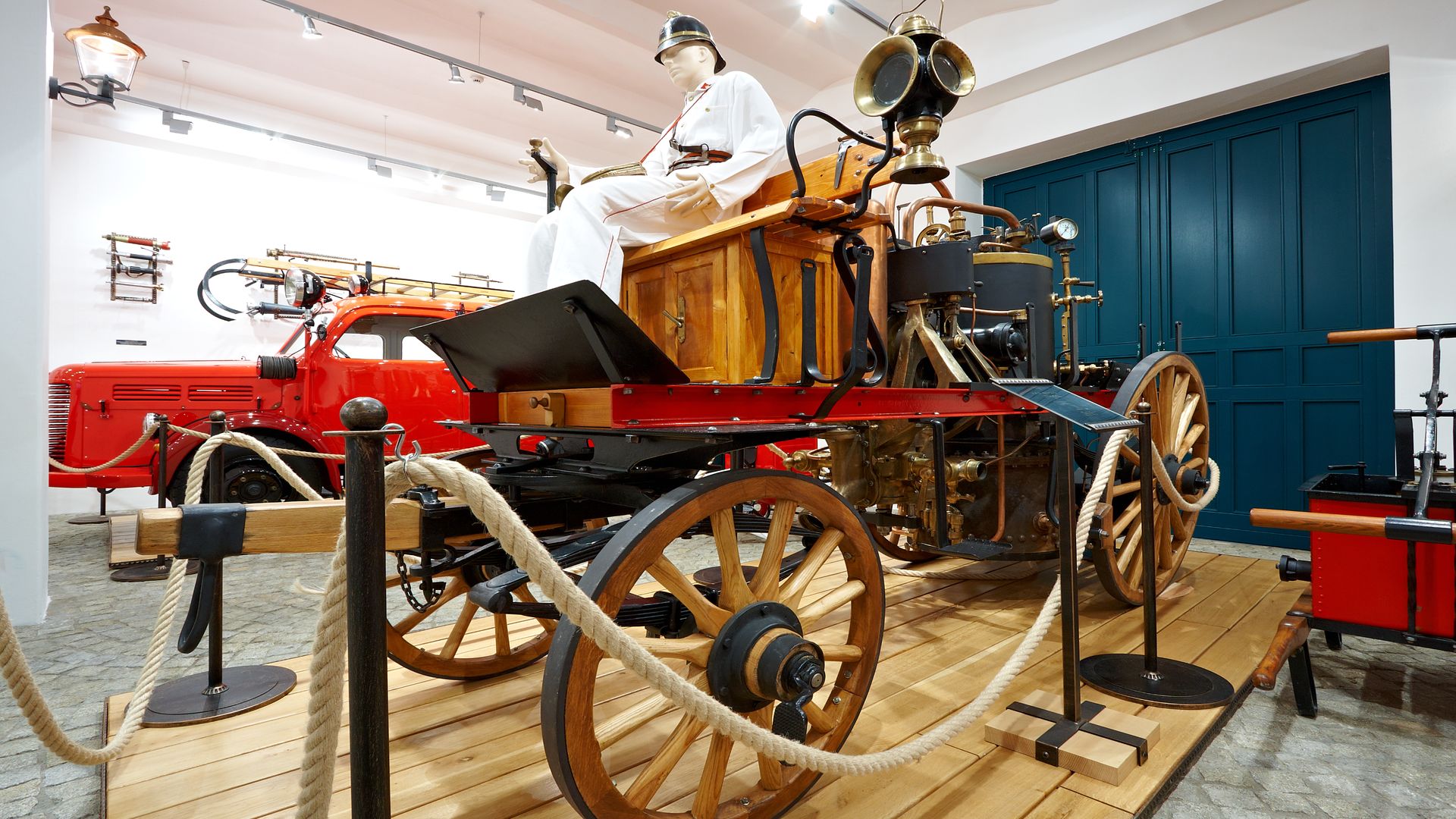 The Ostrava City Fire Brigade Museum was opened in 2005. The very history of firefighters in the building began, however, already a hundred years earlier. First, beginning in 1905, German volunteer firemen operated there. Then, a Czech voluntary fire brigade operated from 1919 until it was abolished in 1980. After that,the Municipal Inspection of Fire Protection (nowadays the term “prevention” is being used) took over the premises and began the construction of the first exhibition of firefighting called the Department of Fire Protection. In 2003 it was decided that a full firefighters’ museum would substitute the rather modest look of the Department of Fire Protection. The investor in the project was the Statutory City of Ostrava and the museum began to be operated by Moravian-Silesian professional firefighters. This project is unique in the Czech Republic because all other firefighters’ museums are under the patronage of volunteer firefighters and private collectors.

Our tour begins in the small hall where you can see examples from the “firefighting souvenirs collection.” There are both models of firefighting equipment and simulated interventions. The exposition in the small hall is supplemented by informational panels which describe in detail the activities of firefighter units over the last year. In the center of the room are located display cases with patches to commemorate Czech firefighters as well as firefighters from all around the world. In this room you can also find a new exposition from the world firefighting games of The International Association of Fire and Rescue Services (CTIF),which took place in Ostrava in July 2009.

In the grand hall the historical development of firefighters is introduced. For the first time we also meet the patron of firefighters – St. Florian. He is responsible for protecting houses against fire and also for making sure all firefighters come back from  interventions safe and sound. There are also historical uniforms to be seen both for emergency care and non-emergency work. In the display cases are also several documents to show that firefighters did not care only about fire protection, but also,that they were responsible for cultural events in their town or village. In the grand hall you can also admire old firefighting banners symbolizing a general concept that is typical to firefighters, and that is to help a person in distress. There is also a hand-operated alarm for you to try announcing a fire as it was done in the past.

In the documentary you can see a virtual tour of our museum accompanied by authentic footage of interventions of the Moravian-Silesian Region Fire Brigade.

Our brand new part of the exhibition describes what happens when we call the hotline in case of emergency and before firefighters are dispatched. The project Integrated Safety Center (ISS) of the Moravian-Silesian region represents a unique system of coordination of DES (Integrated Emergency System) components at the operational level – all in one place. Conceptually it is based in the Center of Emergency Call in Ostrava, which has demonstrated for 13 years on an everyday basis the effectiveness of involving all operational centers in one place.At its beginnings this project introduced an entirely new solution which gained awards many times at home and abroad.

A DEMONSTRATION MODEL OF A TRAFFIC ACCIDENT INTERVENTION

A demonstration model of rescuing traffic accident victims. A car driver is stuck after hitting the road barriers. An emergency car is sent from the central station to turn quickly. On arrival the vehicle is secured with wedges to avoid movement. The battery is disconnected and by using hydraulic salvage equipment. The injured driver is gradually released. Immediately after the firefighters arrive at the location of accident, they provide the driver with pre-medical first aid.

Here you can observe a gradually improving branch of firefighting activities, such as work at heights and over open water. There are several methods of rescuing people from  wells or trees or by using a rope bridges. Interesting here is the uniform for members of the USAR team, the unit formed from the Fire Brigade of the Moravian- Silesian Region only recently who are ready to help anywhere in the world in case of earthquakes and other disasters.

In the original fire house garage in Ostrava-Privoz you can see the very first examples of technology that people used to fight fires. On display are several types of hand-operated portable, trail, or automobile fire engines. You can also see a renovated steam fire engine from 1911. The first means for extinguishing fires are worth noting, and they are fire buckets. And again St. Florian, this time larger than life-size, who oversees all of this.

For more information about the Ostrava City Fire Brigade Museum in Moravian – Silesian Region, from which this museum comes, click here and here.