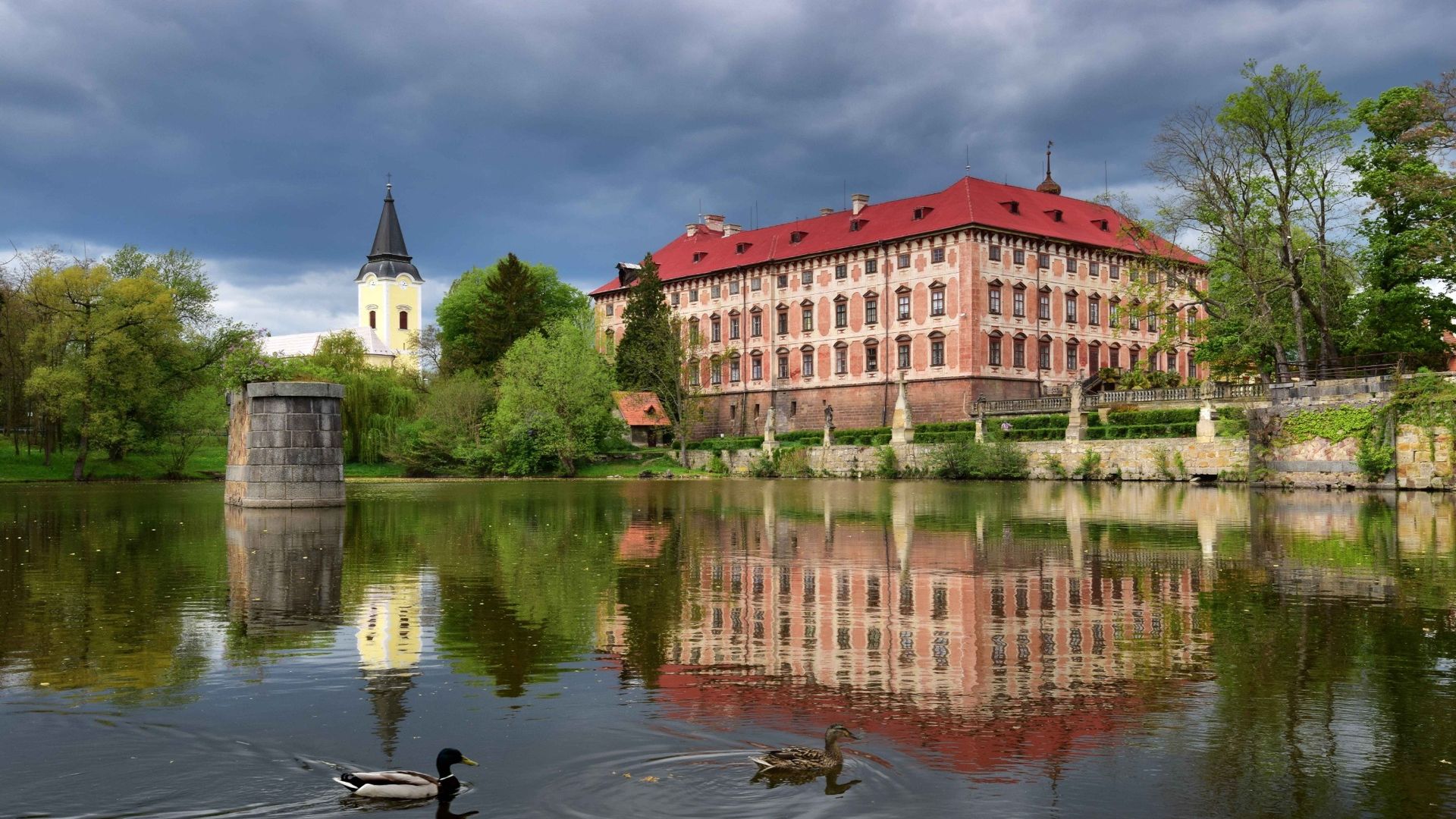 At present, the Libochovice chateau is under the administration of the National Monuments Institute, a territorial monument administration in Prague. On January 1, 2002, it was declared a national cultural monument.

The town of Libochovice lies on the left bank of the river Ohře at an altitude of 555 feet above sea level. The ruins of the Házmburk Castle rise above the town, whose history has always been closely connected with Libochovice. To the south of the town rises the Slaný Plain and in the north the region is bordered by the characteristic hummocky hills of the Bohemian Central Mountains.

In 1272, the town belonged to the Teplá Monastery. The first verified mentions of Libochovice date back to 1336, when Libochovice is marked as a “paid town” with a fortress. At that time there was a parish church.

It became part of the estate of Klapý Castle (later Házmburk), which belonged to the lords of Lichtenburg. Libochovice probably belonged to them since 1292, when Heiman of Lichtenburg, in a now-lost deed, granted the Libochovices certain villages and allowed them to enjoy Magdeburg law. At the beginning of the 14th century, Hynek of Žleb and Lichtenburg of the Ronovice family received the property, and in 1314 King Jan of Luxembourg bought it from Hynek’s son. In 1335, however, it was sold and the village of Klapý, with estates and hamlets, the town of Libochovice with a fortress (artillery) and the villages of Radovesice, Lhota, Poplze and others passed to – Zbyněk Zajíc of Valdek, lord of Žebrák. (In this record, the Libochovice fortress is explicitly mentioned in the sources for the first time.) This family was one of the most important in the kingdom, right after the Rožmberks and Šternberks.

From 1341, Zbyněk Zajíc and his descendants were mentioned in writings by the nickname “Hassenburka.” Zbyněk Zajíc from Hazmburk rebuilt the Libochovice fortress into a Gothic form and the foundations of the chapel at the entrance to the chateau date from this period. However, the lords of Hazmburk were zealous Catholics and sided with Emperor Sigismund in the Hussite Wars. Therefore, in 1424, the town of Libochovice was burned and demolished by the Hussites and the fortress found itself in ruins. The fact that after the Hussite Wars the town and probably also the fortress were restored is evidenced by a letter from Jan of Smiřice to Oldřich of Rožmberk from 1446, which says: “Don’t know that he was now here with Mr. Zbyněk [i.e., Zbyněk Hare of Hazmburk] in Libochovice. ” So this meeting apparently took place not at Hazmburk Castle, but in the Libochovice Fortress. During the revolt of the Czech lords against King George of Poděbrady, the Hazmburks stood against George on the side of Matthias Corvinus, whose army then camped at Hazmburk in 1469 and greatly devastated it.

Since then, the Hares resided primarily in Budyně and the castle and chateau were irretrievably destroyed. In 1507 the rebuilt town of Libochovice received from King Vladislav, at the request of the minor John III of Hazmburk, an annual fair and a weekly market. After the death of John III the manor was divided into several parts. Libochovice then belonged to Kryštof of Hazmburk, who lived in a burgher’s house in Libochovice [the “Zelená Hora” (Green Mountain) house – today the U černého orla (at the Black Eagle) inn], because Hazmburk Castle was already desolate and the fortress in Libochovice was not habitable. In 1558, Kryštof Zajíc sold his part of the Hazmburk estate to Jan the Elder of Lobkovice. In 1564, his brother Jiří Zajíc sold his land to the same master. This ended he Hazmburk estate and the Libochovice estate, which at that time included the town of Libochovice and 11 villages: Klapý, Sedlec, Vojnice, Lkáň, Třtěno, Radovesice, Dubany, Poplze, Křesín, Levousy and Horka.

For more information about the Usti region, from which chateau comes, click here and here.