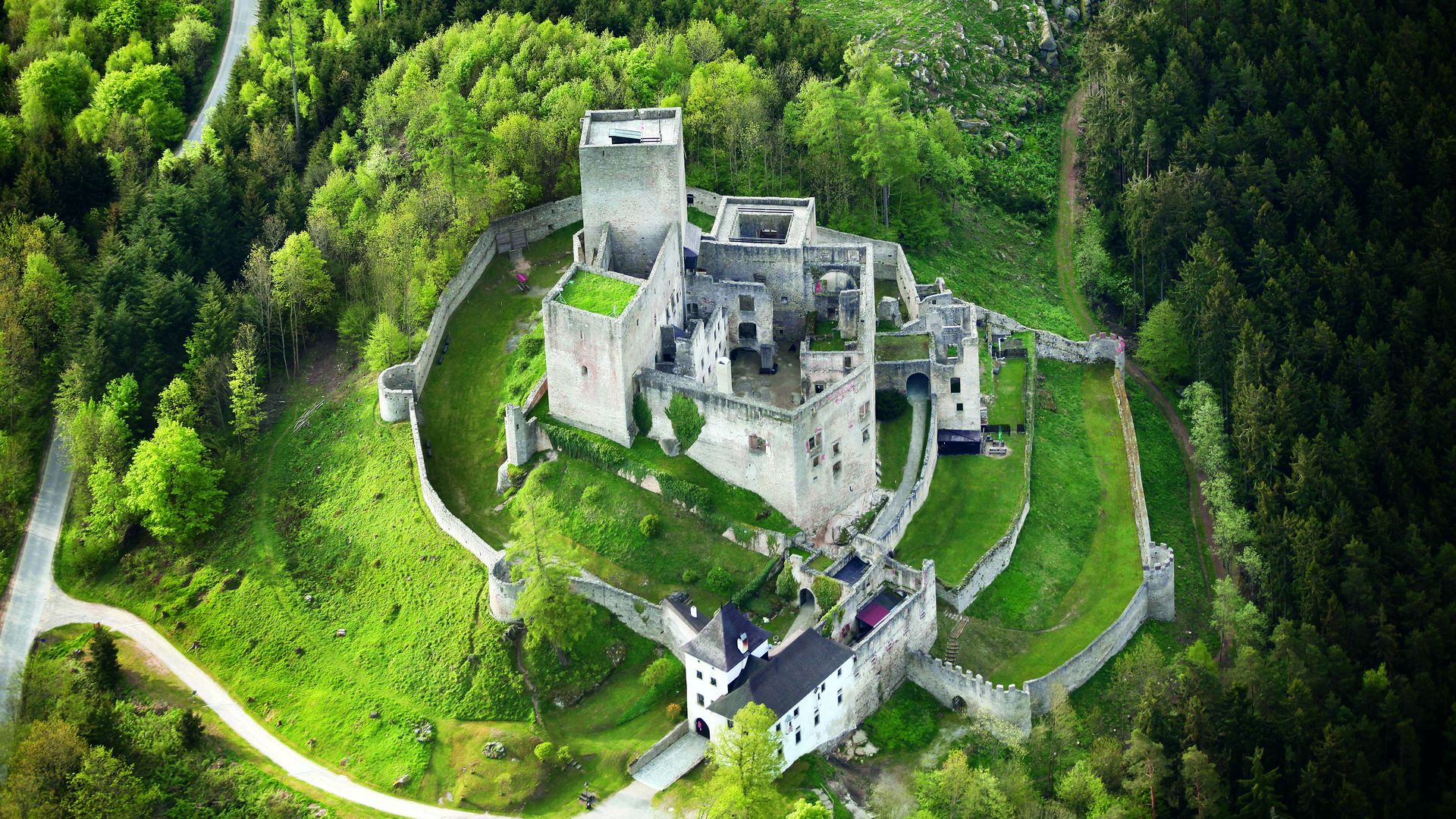 Landstejn Castle is located in the southeastern tip of Bohemia at the junction of three land borders – Bohemian, Moravian, and Austrian. This area has been called Czech Canada since the 1920s due to its resemblance to the forested landscape of Canada. The castle is a massive fortress guarding the land border and the former trade route from Bohemia to Moravia.

Landstejn Castle is a unique example of the development of the defensive castle system from the 13th to the 16th century. It is the only preserved building from the first half of the 13th century in the Czech Republic. The construction of two prismatic towers with a residential palace sandwiched between them is unparalleled in Central Europe. The castle chapel from the 13th century, inserted into the space of a smaller prismatic tower, is unique. The castle is surrounded by three circuits of fortifications from the 13th, 14th, and 16th centuries. During the following period, the old castle core was modified and the area was expanded according to the requirements of the development of the defense system and housing.

The builder of the castle was probably the Czech king Premysl Otakar I. During the 13th century, the castle came into the possession of the most important South Bohemian aristocrats, the Vítkovec family. Its branch, located in Landstejn, derived its name from the castle – the lords of Landstejn.

The following owners, the Krajirs of Krajek, whose family came from Carinthia (the southern part of present-day Austria), converted the originally Romanesque castle into a comfortable Gothic mansion during the 15th century and then during the first half of the 16th century into an exhibition Renaissance chateau. However, the massive reconstructions completely exhausted the family financially. The castle had to be sold and its owners have changed very frequently
since then, alternating between both Czech and Austrian masters. The castle ceased to be used for housing; it became only the seat of the administration of the estate.

In 1771, lightning struck the large tower, which set the castle on fire and burned it down completely. It was never rebuilt and gradually fell into disrepair.

In 1945, it was expropriated from the last aristocratic owners of the Austrian Sternbach family and the state took over the administration. Since 1972, extensive reconstruction and conservation has taken place, which has modified the ruins to their current form. The castle has been open to visitors since 1990. The administration of the state castle is entrusted to the National Monuments Institute.

The castle is open from April to October without a guide. There are information boards (also in English) in the area, which will acquaint the visitor with the history and construction of the castle. It is possible to climb up to the gallery of the large Romanesque tower, from which there is a view not only of the entire castle grounds but also of the landscape of Czech Canada.

Archaeological excavations in the castle grounds have revealed a large number of interesting objects, which are shown in the castle’s entrance exhibition and illustrate life in the castle over several centuries.
In the summer months, the castle is a venue for fencing tournaments, theatre performances, concerts, and jugglers’ performances.

For more information about the South Bohemian Region, from which this castle comes, click here and here.