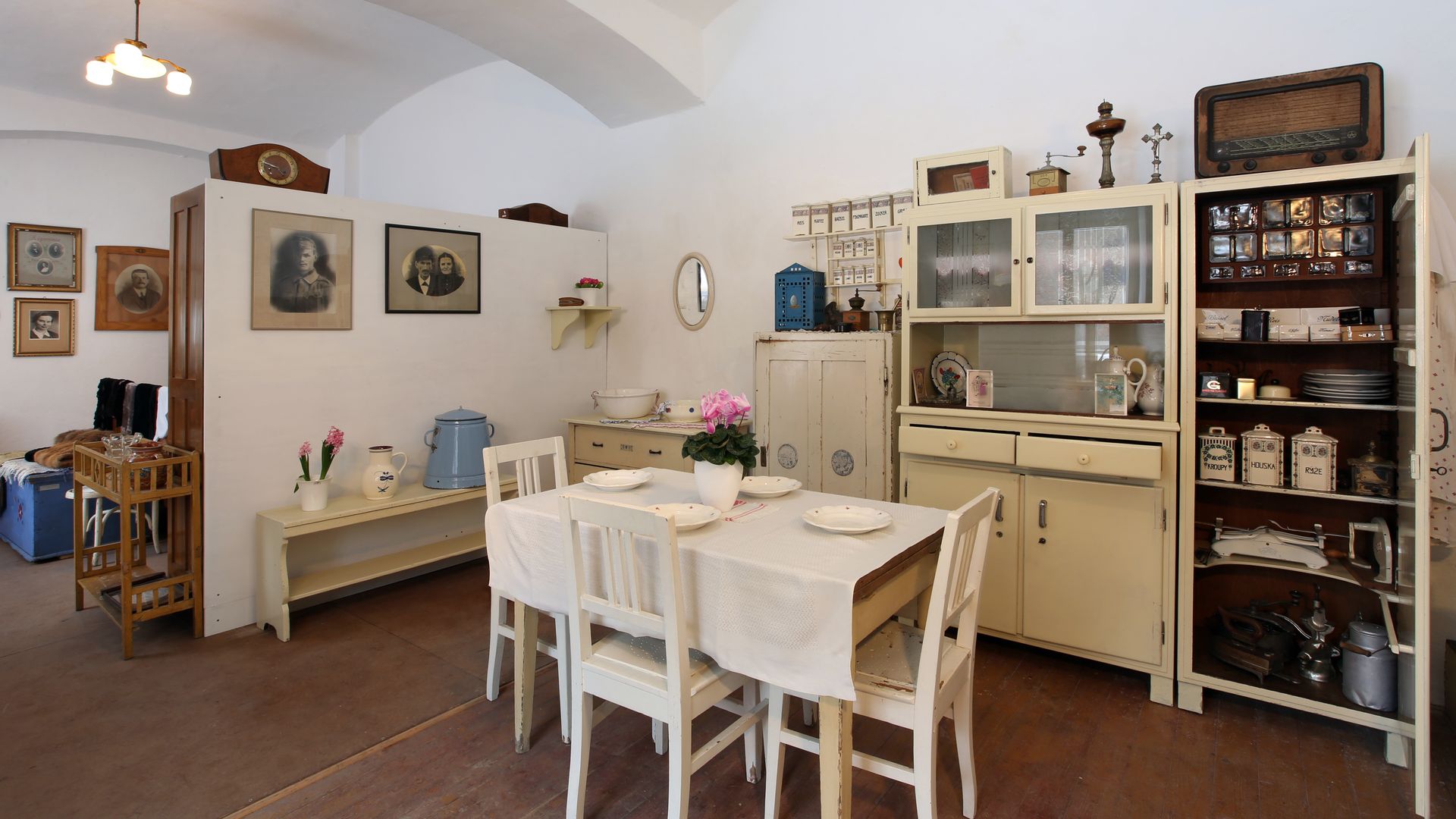 The museum is focused mainly on Silesian village life in the mid-20th century. Emphasis is placed on the traditions of the first Republic. The former sheepfold houses an exhibition of contemporary living showing the preparation and storage of food, domestic work,and a collection of irons and kitchen scales.

In the former grinding mill is a reception area with hygienic equipment on display and in the barn, farm machinery and agricultural implements can be seen. A blacksmith shop, joinery workshop using contemporary techniques, primary school, library, and various crafts are located in the shed.

The museum exhibition is open and constantly evolving with additional artifacts. We welcome new and interesting exhibit pieces as well as financial and material assistance. We want to show that Silesia is a beautiful and interesting multicultural region with a rich history, where skilled and hardworking people of different nationalities have always lived together .

Many of the items in our Silesian exhibits, especially those from Opava, were sentenced to death and would have ended up in landfills or burned on the stove. After repair and treatment they have  huge explanatory power, appealing to older visitors’ memories of youth. But also the younger population for whom these objects often evoke feelings of respect and admiration for the skills of their ancestors.

Most were built to serve several generations, and their functionality has been maintained to this day. The museum was founded by the donations of many citizens, who thus became its co-founders and creators. They deserve our thanks and admiration.

THE HISTORY OF HOLASOVICE

Economic Justice in HOLASOVICE originated in the area of a former fort on a hill in the center of the village in the Middle Ages. When Opava was divided in 1377, Holasovice fell to the Krnov principality. In 1523 the estate was purchased by George Chamber of Hohenzollern. In 1623 it was awarded to Charles of Lichtenstein. Lichtenstein held the estate until 1926.

After dividing the estate into smaller plots in 1918 the landowner Louis Havlicek was Justice of the residual estate. The Court held until 1938, when his property was seized by the Germans and subsequently confiscated in 1948.

Farm buildings were gradually built on the courtyard until an extensive complex with two courtyards interconnected by a passage in the barn was formed. Access could be secured by two gates: the main Baroque gate, facing the square, was demolished in 1996.

Most of today’s buildings were built or rebuilt in the 19th century. The first definite evidence of farm buildings is a plan to build a shepherd’s house in 1832. The oldest building is apparently the baroque granary from the 18th century, which is a listed building.

After 1989, the farm was returned to the descendants of the former owners. The current owner of the village of Holasovice has provided land for civic associations such as the Silesian countryside location for this regional museum.

In the future, we will become a resort under a new name – The court of HOLASOVICE – home to a useful community center. A ceremonial square will be created in the first courtyard surrounded by amenities and housing.

The Holasovice area is one of the most important archaeological sites of the Region. Numerous findings were recorded here during various construction activities in the 19th and in the first half of the 20th centuries. Many of them became part of museum collections in Opava and Vienna.

In addition to settlements belonging to several prehistoric cultures in the western part of the court, skeletal remains have also been found in graves, suggesting that in the Middle Ages a sacred building could have been found here.

These circumstances, together with a reference to the Slavic tribe Holasic in the name of the village have led some scholars to believe that these places were the center of this ethnic group, first mentioned around the mid-9th century in the list by an anonymous author known as the “Bavarian Geographer.”

The archaeological excavations in the garden of  House No. 83 uncovered part of a rectangular nave and a polygonal presbytery. Art historical analysis shows the formation of a church in the 1230s and 1240s. Part of the construction work has been linked to the Cistercian monastery in Velehrade and its construction.

The importance of the site in the second half of the 12th century shows remnants of older, wooden sacral buildings destroyed by fire.

Recent archaeological excavations were carried out in 2011-2012. It has been shown that settlement had already begun in the fourth millennium BC (Late Stone Age – Eneolithic culture) when there was a fortified settlement protected by an archaeologically-identified moat. Evidence of fortifications originating from the Bronze Age (Věteřov culture and Lusation Urnfield culture of the second through first millenia BC) and traces of settlement activities derived from the Early Roman (3rd-4th century AD) were also identified.

For more information about the Museum of Silesian Countryside in Moravian – Silesian Region, from which this museum comes, click here and here.