by Volha Tsiasliuk from Czech Republic.

Game Developers Session in Prague is one of the oldest European indie game developers conference. Its goal is to allow collaborations and experience sharing. It is a regular meeting of game developers from Central Europe, especially Czech and Slovak. The first year was in 2003 and we were on the 4th and 5th of November 2016 in the 14th year at beautiful National House of Vinohrady.

The conference usually takes three days. During these, game development teams present lectures, their projects and current topics in the field. Also, there is a place for independent developers to introduce their projects to the representatives from game development companies and to the public. On Thursday and on Friday there were two networking parties in the center of the city – warm up party at Infinity Bar and main party at Club Lávka.

On Friday there were interesting lectures like “This War of Mine – 2 Years After the Release” by Pawel Miechowski (11 bit studios), “From Dream to Dream Job: How to Get a Job in the Games Industry” by Silvia Wipfler (Warhorse Studios) or for example “Game Startup Dreams Crash Into the Wall of Reality” by Michal Harangozo (Charged Monkey) and many others.

On Saturday there were for example “How We Started Game Project From University, and How It Rocks” by Michal Kikta (PowerPlay Studio), “Designing Darkest Dungeon” by Tyler Sigman (Red Hook Games), “How We Were Shooting the Film Kingdom Come” by famous Daniel Vávra (Warhorse Studios) and many others.

Marek Plichta from Space of Play. 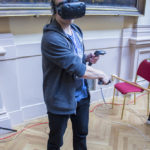 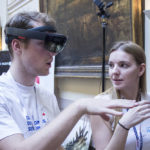