The 17th annual Forum 2000 Conference was held in September, 2013 in Prague and other cities. More than 100 global leaders from politics, academia, civil society, media, business and religion discussed challenges and threats related to democratic transitions.

The Forum 2000 Foundation pursues the legacy of Václav Havel by supporting the values of democracy and respect for human rights, assisting the development of civil society, and encouraging religious, cultural and ethnic tolerance. It provides a platform for global leaders, as well as thinkers and courageous individuals from every field of endeavor, to openly debate and share these critical issues. 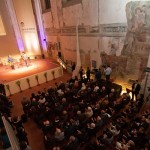