This is a very festive and traditional meal with origins in Central Moravia, particularly the Olomouc Region, that dates back to the Middle Ages. Back then it appeared at almost every wedding table. Today, although it is not so common at weddings, Czech people still enjoy eating it very much. It can be found on good restaurants’ menus, especially those with a medieval or traditional Czech theme. This meal is special for its combination of sweet and salty tastes, which is highly recommended throughout old Czech cookbooks. Since this is a traditional dish, its preparation is quite time-consuming, so put aside at least an hour to cook this recipe.

For more information about the Olomouc region, from which this recipe comes, click  here.

First, wash and cook the ham in a pot of boiling water. When ready, put the meat aside and cook dried plums in about 1 cup of the same water until they are totally soft. You can use the rest of your broth as a base for soup if you like. While cooking, take another pot, melt butter in it, and add flour to it to make a light roux, which will thicken your sauce. Pour the smoked ham broth with plums into the pot with roux, then cook while stirring until the sauce gets smooth and thick enough. It should have a texture similar to ketchup. Finish the sauce by adding plum jam, lemon juice, grated lemon peel, cinnamon powder, and salt to taste. If the plums are too sour, add some sugar or honey to get a nice sweet sauce. Once you are satisfied with the taste, use a strainer to separate plum pits from the sauce. (If you have plums without pits, you can, of course, skip this step). Cut the meat into slices 1/4 – 1/2 inch thick, put them on plates, and pour some sauce over them.

This meal is usually served with traditional Czech-style dumplings (both bread and potato ones), but potatoes cooked in skin or oven-baked will work fine too, and they add a nice traditional touch to the dish. It is also possible to serve with sourdough rye bread. 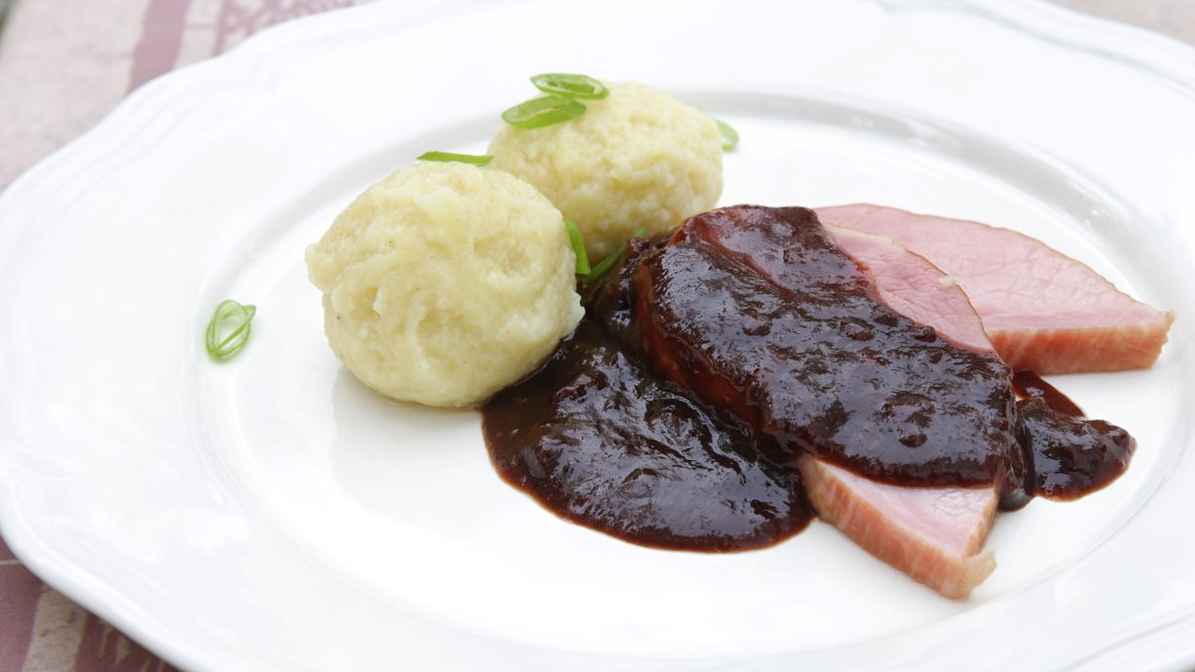