Verbunk and The Ride of Kings

Folk architecture, ancient crafts, congenial folk traditions and old customs which you will not find anywhere else, bright and richly embroidered costumes, charming melodies accompanied by cimbalom and woodwind music and festivals of thousands of ways. Carnival festivities, harvest festivals, church feasts, and above all the Hody festivity – such is the year in South Moravia, in a region where festivals are still honored and celebrated.

Verbunk is an improvised dance composed of intro vocals and the dance is based on the emotions of the performer, which combine the strength, temperament and skills of the dancer. In 2007 verbuňk was registered in the list of the UNESCO Masterpieces of Intangible Heritage of Humanity – the very first registration of this type for the Czech Republic! Up to the present day it is danced in the majority of villages in Moravian Slovakia (Slovacko) at weddings, feasts and vintage festivals.

The Ride of Kings, once a common Pentecost ritual, is based on a 15th century event, when Hungarian King Matyas, after being defeated by George of Poděbrady, escaped to Hungary disguised in women’s clothes. Written records mention the fi rst Rides of Kings dating back to the 16th century. The King rides a white horse disguised in women’s clothes, with his face shrouded by ribbons and with a rose in his mouth to prove the oath of silence. A parade of the king’s retinue accompanied by many riders in beautiful folk costumes on decorated horses has an unrepeatable atmosphere. Probably the most famous Ride of Kings is held in Vlcnov on the last Sunday in May. In mid May the Ride of Kings goes through Kunovice, it usually is a part of the Dolnacko festival of song and dance in Hluk (once in three years in July, last time in 2008), the tradition is also held in Haná – every year in early July the Ride of Kings takes place in Doloplazy and in mid August in Kojetin. Since 2011 it has been registered in the UNESCO List of Masterpieces of Oral and Intangible Heritage of Humanity. 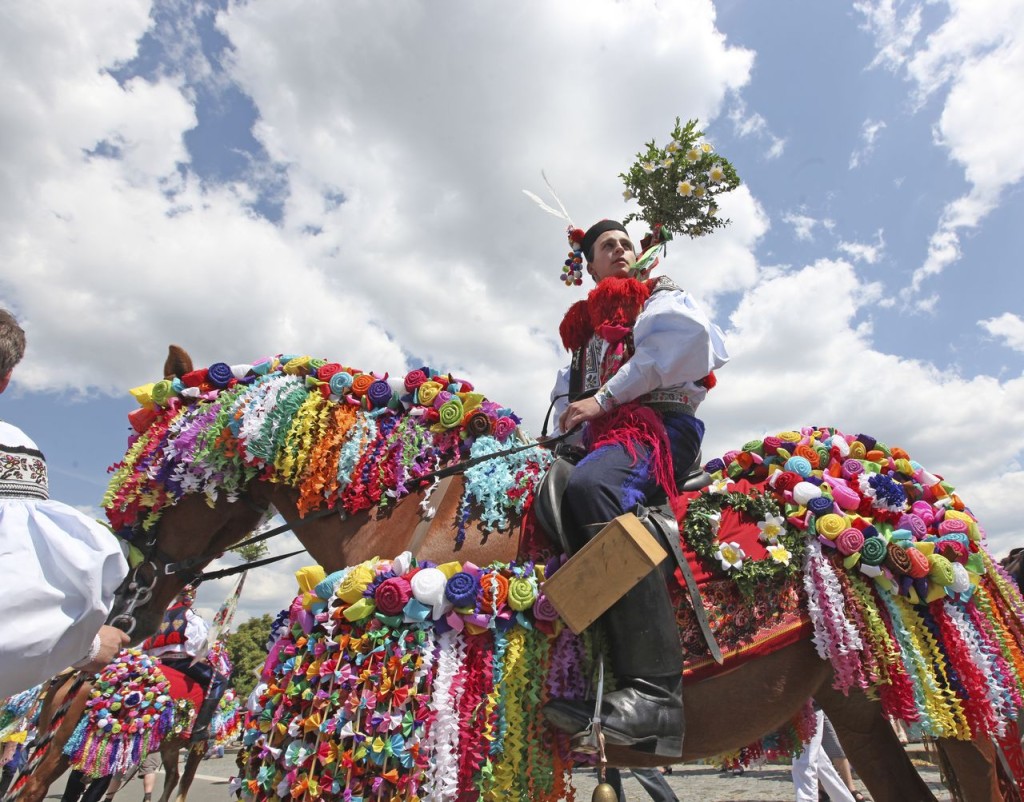