The Teplice Rocks are one of the most visited natural attractions in the Czech Republic. They are part of the Adrspach-Teplice Rocks National Nature Reserve located near to the town of Teplice nad Metuji in Hradec Kralove Region. It is the largest nature reserve of its kind in Central Europe. The nature reserve was founded in 1933 in order to protect the well-preserved natural phenomenon.

The Teplice Rocks are separated from the Adrspach Rocks with a deep ravine called Vlci Rokle (Wolf Ravine). There are about 70 named rock formations. Some of the names are dated back in the 18th century and they should represent the actual shape of the formation. Here are some examples so you could make your own idea: the Sphinx, the Polar Bear, the Temple, the Siberia or the Rock Crown.

The whole sandstone area is divided into four main parts; the Skalsky Hreben (the Rock Ridge, 2277 ft), the Cap Hrebeny (the Ridges of Stork, 2578 ft), the Supi Skaly (the Vulture Rocks, 2529 ft) and the Kravi Hory (the Cow Mountains, 2408 ft). Then there are also quite ragged plateaus called the Bludiste (the Maze).

Along the Teplice Rocks flows the Skalni Potok (the Rock Stream) around which is an educational path. The path is almost 3.5 miles long and takes about three hours of walk. All the marked stops are full of beautiful photos and interesting facts about the history or the local fauna and flora.

Thanks to its unique rock formations, the place is highly visited by climbers. The first peak to be climbed was the Skalni Koruna (Rock Crown) back in 1927. However, now there are some strict rules about climbing in this area because by the law it is banned to rock climb in nature reserve without a permission.

Fun fact! In 2005, some scenes from The Lion, the Witch and the Wardrobe of The Chronicles of Narnia by C. S. Lewis were filmed righ there.

For more information about the Hradec Kralove Region where this place is located click here. 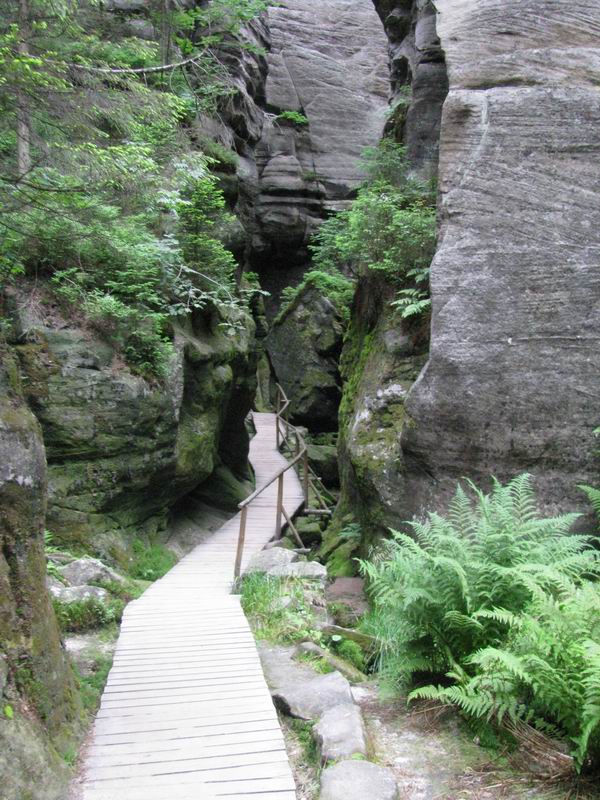