Sychrov Chateau is situated in the small town of the same name in Liberec region. It is a state chateau which was opened to the public in 1950. The chateau complex is a unique example of a Neo-Gothic aristocratic residence typical for the 19th century. Sychrov was made a National Monument in 1995. It was originally a Late-Gothic fortress that was destroyed during the Thirty Year War, after this great devastation, the baroque chateau was built there instead. It was bought by French aristocratic family of Rohan’s in 1820 and since that it has been severally rebuilt and reconstructed according to the requirements and trends of particular periods. Some very influential and important people visited this chateau and left there a significant mark, namely a famous Czech composer Antonin Dvorak is connected with this sight, it is said that he has visited it seven times in order to meet his long-time friend Alois Gobel. An extraordinary beauty of a nearby-situated English park, which was his favourite place to go for regular walks, served as a great inspiration for many of his compositions. We can also mention some other important people such as a former French king Karel X., Marie Terezie or Carl Ludwig who accepted invitation to this remarkable complex. There are some interesting cultural events worth emphasising such as traditional music festival dedicated to Dvorak’s music called Dvorak’s Sychrov and Turnov which has been held there since 1951. Many people’s attention is also captured by the annual Scottish games which give the people involved insight into Scottish culture. Music lovers can visit summer concerts whose line-up consists of foreign artists as well as famous Czech musicians. There is also a possibility to use the historical spaces for having a wedding ceremony there. Sychrov belongs to sought-after places for the movie makers, many Czech fairy tales, documents and historical films have been filmed there. 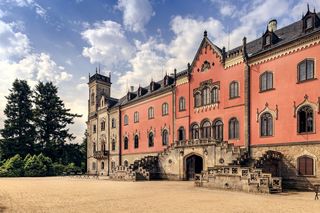