The Nebilovy State Chateau represents the top baroque architecture. It was built at the beginning of the 18th century. The architectural layout of the building is quite unique in Czech lands. The two “horseshoe-like” buildings stand opposite each other on the longitudinal axis of the courtyard. Both buildings were originally connected on the sides of the courtyard with one-storey buildings carrying flat terraces with a balustrade. The decoration of interiors, represented by wall paintings by Antonin Tuvora, is also exceptional. The painting on an area of approximately 1312 square feet is a fantastic subtropical landscape with animals, lush vegetation and ancient architecture. The chateau was used for more than 120 years as a courtyard. The renovated and refurbished building has recently become a cultural and social centre of the Southern Pilsner Region. In the back building there are representative rooms – including a large ballroom, rebuilt in the 1880s, and the chapel of St. Antonin. There used to be a smaller hall with a baroque ceiling painting in the front building with the clock tower. On the east side there was a farmhouse adjacent to the grounds and on the west side there was a formally landscaped garden with a large fountain and three pavilions with a fencing wall with niches. Upon its completion, the Nebilovy Chateau was practically uninhabited due to the static disruption until 1785. In 1919 during the land reform, the entire site was transformed into a farmhouse and later divided into smaller parts and sold out. Since 1968, it has been owned by the state and a continuing revitalization is being carried out. The Nebilovy Chateau is a representative of the typical Viennese baroque architecture. Its remarkable layout resembles the chateaux in Aschach City, Halbturm City, the Viennese residence of Belevedere Palace, or the Salzburg Mirabell Palace – the first works of architect Johann Lucas von Hildebrandt who was without a doubt the author of the present appearance of the Nebilovy Chateau. 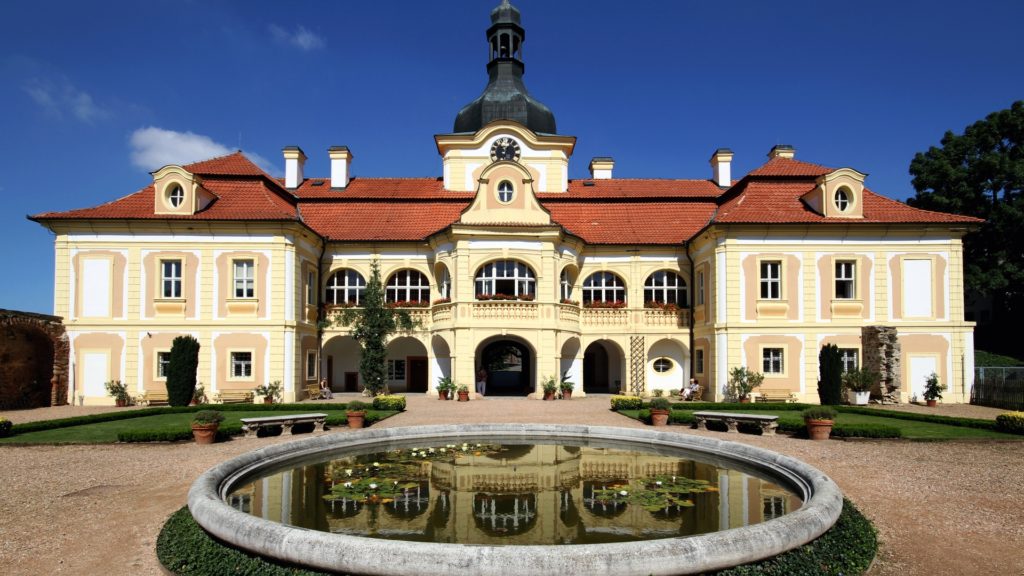