Today we will take look at another recipe from our series about Czech pastries, learning to cook East Bohemian fried apple pastry. First, however, let’s take a quick turn to the history of potatoes. Potatoes were brought to Europe by Spanish conquerors from Peru in the 16th century and were first used as ornamental plants or herbs. But, later on, people started growing potatoes as a food source – potatoes were first cooked in the year 1616 for a feast organized by French King Louis XIII. In the 17th century, potatoes came to Bohemia as herbs. In Eastern Bohemia they were very popular and for that reason widely grown around the years 1771 and 1772, which were called the “hungry years.” Later on, large quantities of potatoes were imported from Prussia. The first Czech variety was grown in the 19th century, and so we couldn’t miss it in this traditional East Bohemian recipe. And, while we are taking a look at history, let’s learn something about Eastern Bohemia. Eastern Bohemia’s topography ranges from valleys and rivers to one of the highest mountains in Czechia, and it borders central Bohemia and Moravia and Silesia. Also, when speaking about geography, this region is easily accessible from other countries, such as Germany, Poland, Slovakia, and Austria. This region boasts not only folklore traditions, but also a number of castles and church monuments in Gothic and renaissance styles. Worth mentioning too is the exceptional historic site Kladruby. Pardubice is famous for its annual horse race, Velka Pardubicka, which is considered to be one of the toughest races in Europe.

For more information about the Pardubice Region or Eastern Bohemia, from which this recipe comes, click here.

But enough of history, geography, and horses — let’s get cooking! This sweet delicacy contains, in addition to so-called “earth apples,” regular apples (preferably from your own garden, you know, to keep things organic, because it’s cool nowadays). The same goes with eggs. But, let’s get going. First, take a look at what you need.

First,  boil unpeeled potatoes. Then let the boiled potatoes cool before peeling and mashing them. Put the mashed potatoes into a bowl. Then add the flour and crack in one raw egg. Mix these ingredients together and create a supple dough.

From this, you should be able to form squares, about 3 to 4 inches. Put grated apples onto these squares and add to each a tablespoon of powdered sugar and a pinch of salt. Fold those squares and connect them at the top to create a little pocket.

Turn on the stove and put oil in a pot, preferably a deep pot to prevent oil from splattering when frying. Put the squares into hot oil and fry them until they turn somewhat golden. Use two forks to carefully take the squares out and put them on paper towels to dry excess oil. When still hot, sprinkle cinnamon on them, and they are ready for serving. 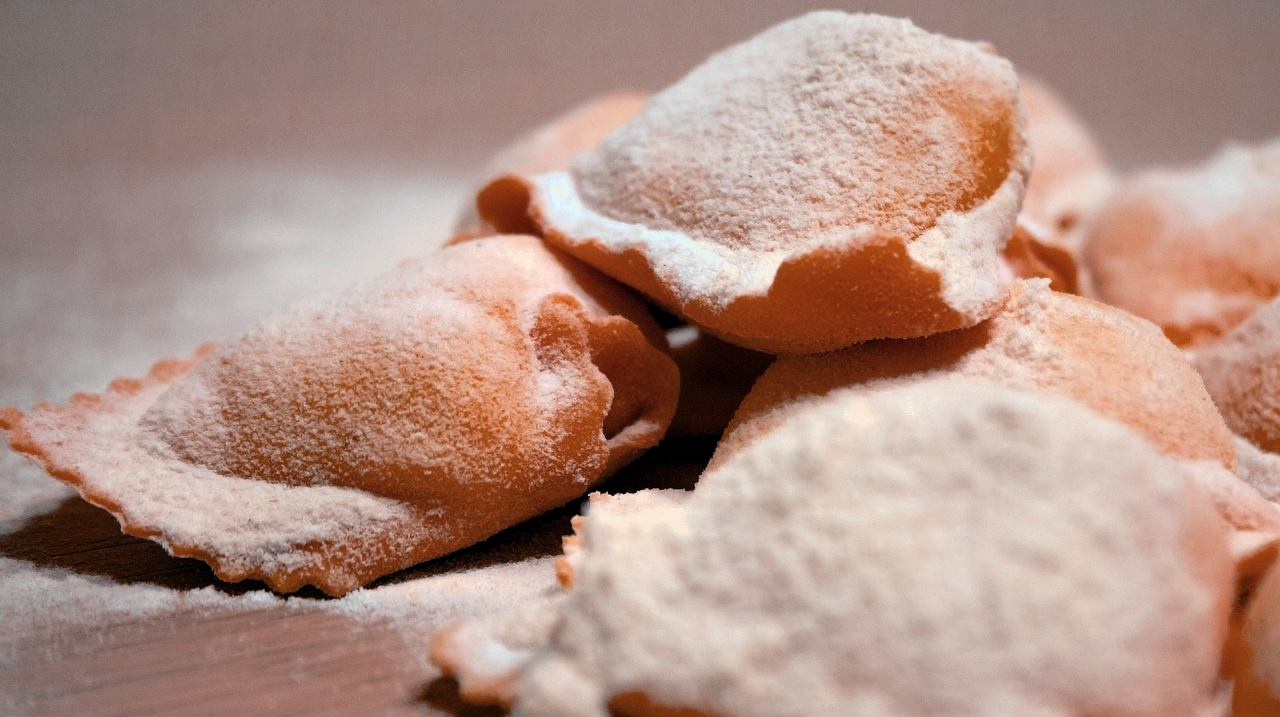