Story of The Pilsen Memorial

Discover Pilsen Region: Pilsen was liberated by The U.S. Army in World War II as one of a few Czech cities. On May 6,1945 soldiers with a white star came to Pilsen and it became the last place where the path of allied troops through European continent ended up. Memory of fighting or dead Americans was forgotten and even belittled and any official celebration marking the arrival of The U.S. Army in Pilsen have been unthinkable before 1989. Since 1990 The Annual Liberation Festival has been held in early May to commemorate this event. 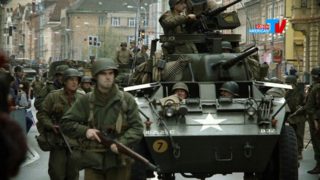 The Annual Liberation Festival offers a rich historical program.  The program is divided into several parts. These are a regularly recurring events, a convoy of historical military vehicles and memorial observation at WWII memorials. Sectional projects of individual clubs of military history offer new and interesting conception of history associated with the presentation of contemporary military equipment, weapons and military activities.

In the documentary “Thank You, America!”  you will learn about the story of The Pilsen Memorial.  There is historic footage of arrival of Americans to Pilsen, given to the city by the American war cameramen after 1989; photographs from private archives of Pilseners and  pictures from 1947 documentary. The film also follows the process of erecting the memorial and its ceremonial unveiling in 1995.

The Patton Memorial Museum in Pilsen includes more than a thousand exhibits from private collections. The exhibition documents the advancement of the US Army in what was then Czechoslovakia, and the deployment of US soldiers until November 1945. Photographs depict the moments of the war´s final days , the arrival of the US troops, moments of relaxation and friendly encounters with locals, as well as some ceremonial events. Significant part of the exhibition focuses on General George S. Patton and General Ernest N. Harmon.