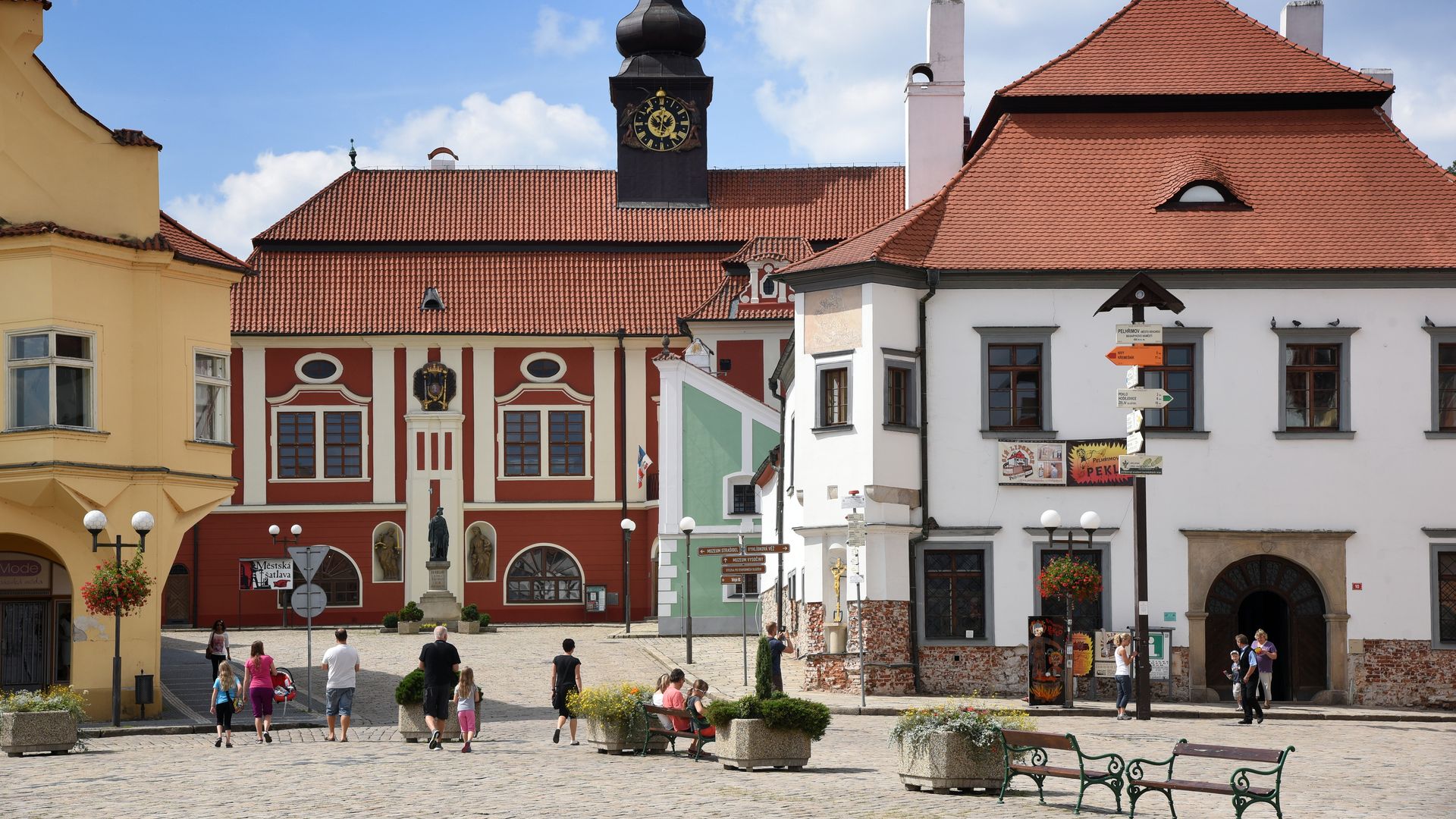 The Museum of Vysocina Pelhrimov is the successor of the Museum Association founded in 1901, which followed the revival efforts to awaken national consciousness. The core of the museum’s current collection was created by collectors’ activities initiated by the Czechoslovak Ethnographic Exhibition in Prague in 1895.

The museum exposition is located in the former chateau of the lords of Ricany, where the town council was located for many centuries. There used to be stables and a fire station on the ground floor of the chateau, which today serves as an exhibition hall. The first floor of the chateau is occupied by an exposition of the renovated town hall rooms, as well as a music lounge and other spaces that depict the lifestyle of burghers from around the end of the 19th and the beginning of the 20th centuries. A substantial part of the chateau premises is occupied by a collection documenting the activities of two important artists, medalists, and sculptors, Josef and Zdenek Sejnost.

The Satlava, built for the needs of the city council, was reconstructed and opened to the public, along with the torture chamber and prison chapel on the historic premises, according to the preserved archival documentation.

The jewel of the museum exposition is a representative fresco hall, originally the dining room of the manor and later a courtroom with a rich Baroque painting designed by Jan Jakub Quirin Jahn. The vault of the hall is divided by three strips into two segments, in the vaults of which are placed two oval mirrors with biblical motifs of Solomon’s court and Joseph in Egypt; in the corners, there are allegories of the Virtues.

Another important exhibit is the so-called mineral plan, the oldest map of Pelhrimov from 1777. The biggest attraction is a model of a three-tier cake made of fondant dough created around 1885.

The museum also manages the house of Dean Frantisek Bernard Vanek in the Dean’s Garden. The permanent exhibition recalls the work of a priest who left indelible traces in Pelhrimov, in the cultural, sports, and civics fields. Dean Vanek, a talented writer and sports enthusiast, was tortured in the Dachau concentration camp for his patriotic attitudes.

KAMEN CASTLE, A BRANCH OF THE MUSEUM OF VYSOCINA PELHRIMOV

An important building managed by the Museum of Vysocina Pelhrimov is the Kamen Castle, 9 miles west of Pelhrimov on the way to Tabor. Originally a Gothic castle, probably founded in the middle of the 13th century, it was named after the remarkable rock on which it was built. Since 1523, the castle was owned for almost 200 years by one of the branches of the important Malovce family from Malovice, who had the castle rebuilt into a late Renaissance and subsequently a Baroque residence. Its current form dates from the 1970s.

The last private owner of Kámen Castle, a Prague wholesaler of rope goods, Antonin Fleissig was a lover of hunting, and in hunting grounds around Kamen, he organized hunts for his numerous friends, similarly to the previous owners. The extensive collection of hunting trophies, which we can admire in the exposition of Kamen Castle, recalls the hunting tradition associated with the castle.

However, the castle is famous above all for its extensive exhibition of single-track motor vehicles, built in cooperation with the National Technical Museum in Prague, manufacturers, and private collectors. At present, a large part of the collection is occupied by Jawa and ČZ machines from pre-war and post-war production. The uniqueness of today’s collection is the leading motorcycle from 1910, which was built entirely by an amateur, the two-cylinder Walter from 1913, originating from the Prague company of the same name, and one of the longest motorcycles in the world: Čechie – Böhmerland 600 from 1927.

Part of the castle grounds is also a park open to the public, which we can say was created gradually during the 19th century, although the age of some trees indicates the possibility of the earlier establishment. The park probably underwent a romantic renovation under the owner Vaclav Enis of Atter, who renovated the entire castle in a historicizing neo-Gothic style between 1860 and 1870. Once again, the park was modified in connection with the reconstruction of the castle for the purpose of the museum of single-track vehicles only in the early 1970s. The terrain was levelled by the introduction of soil, paths were established, and tracts of azaleas and rhododendrons were planted. In the southern part of the park grow two state-protected trees – red beech and nutkaj cypress.

For more information about the Vysocina Region, from which this museum comes, click here and here.