This recipe come from the Bohemian Paradise.

Bohemian Paradise is the Czech Republic’s oldest protected landscape area. It is situated about 70 miles from Prague and comprises three regions: the Liberec region, the Hradec Kralove region, and the Central Bohemian region.

Originally bramborak was made without eggs and only with a little bit of flour; later, not only garlic but also onion were added. This mixture was baked in the oven and served with a glass of milk. Later the eggs were added and it was fried without any fat. That was because even without the fat, bramborak was already not easily digestible and the fat would only make it worse.

To make bramborak really well, it is better to have fresh ingredients (especially the seasoning) and prepare the garlic at the moment of cooking. It doesn’t really matter which type of potatoes are used, even though historically new potatoes were considered of better quality.

For more information about the Bohemian Paradise and the Regions, from which this recipe comes, click here and here  and here.

Peel the garlic, and then press five cloves and cut the other five into little pieces. Peel the potatoes, and then wash and grate them while they’re uncooked. Strain the water from the grated potatoes. Add warm milk, eggs, Wondra instant flour, sliced fully-cooked smoked ham or Canadian bacon, pressed garlic, marjoram, salt, and pepper and stir everything together. Melt the lard on a pan, put the mixture on it, and fry on both sides. In a smaller pot prepare roux (by mixing flour and butter), and, while stirring, add water. Add to the sauce salt to taste and chopped garlic. Cook for about 15 minutes over low heat. Serve “bramboraky” on a plate and pour the garlic sauce over them. 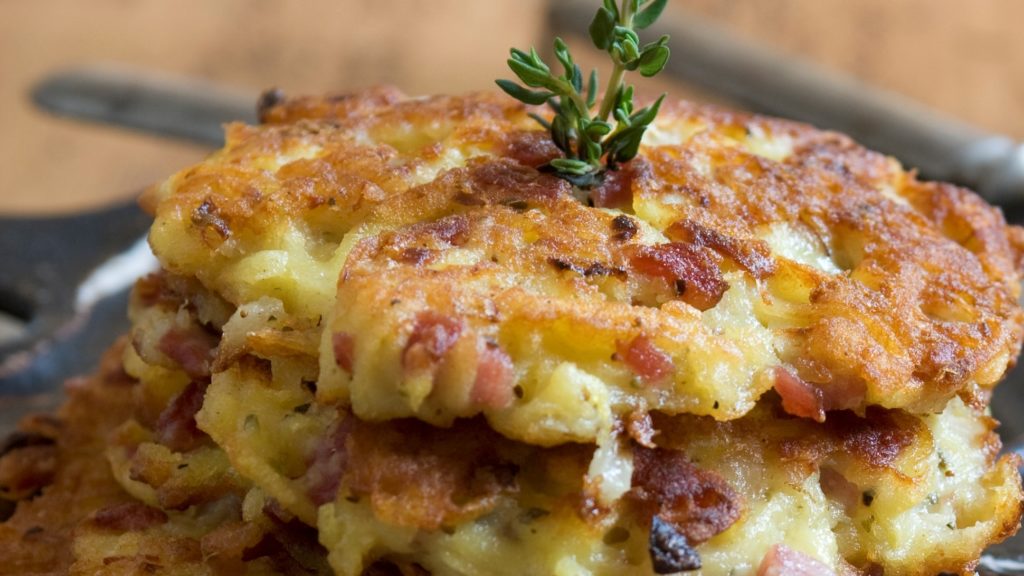