Venison is a quite popular food in the Czech Republic due to the fact that it is seasonal and sometimes difficult to get in the off-season. The season starts in late autumn, when sportsmen hunt wildlife in the forests and on the fields. Some of the hunters even use hunting dogs, which helps them chase down wildlife. Venison meat is diametrically different from the meat of more typical, domesticated animals — the taste and even the smell differ. However, not everyone enjoys the unusual taste of this meat, which is unique and cannot be mistaken for anything else. Due to its scarcity, those who love this meat seek it out to diversify their menus. The meat is also notable for its color, which is dark brown. Moreover, this meat does not contain much fat, because wild animals move much more than do domestic ones.

Meat preparation
Chop the walnuts into small pieces and put them, the breadcrumbs, and half the butter into a bowl. Mix these ingredients together to create a crust. Clean the venison, cut it into chunks, and then sprinkle it with salt and pepper to taste. Mix the meat with thyme and a few drops of oil and then refrigerate overnight. (Refrigeration is not necessary, but it is recommended for better taste.) Heat a pan for about 1-2 minutes and then add the meat chunks. Flip the meat, but only once; otherwise, gravy from the meat will be lost. Then coat the top of the meat with the crust of mixed walnuts, breadcrumbs, and butter. Next, cover the pan with a lid, reduce the heat to “low,” and fry.

Fruit preparation
Clean the apples and pears and then cut them into quarters. Heat the pan for about 1 minute, and then add the second half of the butter to the pan and let it melt. Next, add the pears and apples to the pan. Then add the pear marmalade (or apple damson cheese) to the pan, followed by the cinnamon and cloves and then the honey. Next, pour the white vine and the Myslivec or Jagermeister. Finally, stew these ingredients for 2-3 minutes. 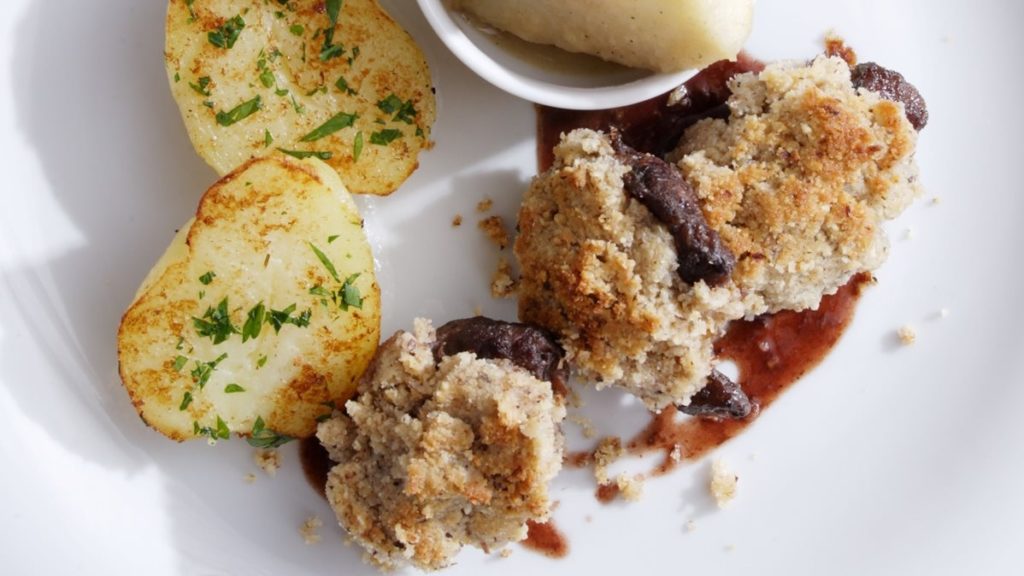