Pernstejn Castle, situated in the eastern edge of Bohemian-Moravian Highlands near the village Pernstejn (Nedvedice), is a gothic castle that was originally built in the 13th century. From this time it served as a residence of the noblemen of Pernstejn. The lords of Pernstejn belonged to one of the richest and most respectable families of the Czech kingdom.

By the time of the 16th century the monument has been severely rebuilt and dilated. Despite this transformation from a gothic fortress to a prestige and impressive Renaissance residence, it retained its resistance and is regarded as one of the most significant Moravian castles. The first mention about this monument in historical sources comes from the 13th century, namely from 1285. The name of the castle itself is derived from the German expression “Bärenstein”- in translation “bear stone” in mineralogy it refers to amber. Through the lower castle flows the river Nedvedicka- which in old Czech means female bear. It was quite common at this time to use German terms to name the objects.

Although the castle has never been conquered, there are some noticeable damages, visible mainly on upper parts and towers of the monument, which were caused by the Swedish army when it besieged the castle in 1645. Nowadays, we can observe some significant changes in the development of this place. The start of the project of reconstruction of the terraced garden in the castle’s area has been planned for this year. 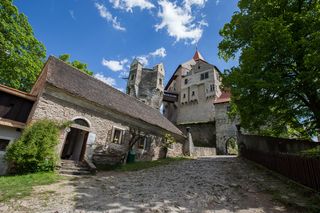