The Bohemian Karst zone, which was declared a Protected Landscape Area in 1972, includes some 700 caves and the most extensive cavern system in Bohemia.

This remarkable feature is called Konepruske caves, and lies beneath a hill called the ‘Golden Horse’; its passageways total over 2 kilometres, dating back 25-30 million years, carved out by water seeping through limestone bedrock. They are known and admired for their beautiful stalactite formations. There is also a mock-up of a counterfeit coin mint hidden here in the 15th century.

The whole area of the Bohemian Karst is a fossil-bed of world significance. Already in the 19th century it was made famous by the highly regarded French paleontologist Joachim Barrande, who discovered many sites rich with fossil finds.

In 2003, the “Barrandien Geopark” was opened at the Museum of the Czech Karst in Beroun. This is an open-air exhibition situated in the museum yard with an area of 340 m2. The main mission of the exhibition is to get acquainted with the geological structure of the Barrandien, even for those who knows nothing about it.

When you are done exploring underground, take the time to stroll through the beautiful wild landscape surroundings, which will enthral you as much as the naturalists of yester-year – who started calling this territory the “Cesky kras” not least because the word for karst reminds Czechs of “krasa”, beauty. Besides Konepruske caves and Museum of the Czech Karst, you can admire other things in this area:

Solvay’s quarries
An open-air mining museum – about 2 km from the village of Svaty Jan pod Skalou. It shows the history of limestone mining in the area. The main attraction here is a ride on the mining train.

„Great America“ quarry
It is a flooded limestone quarry near the municipality of Morina. The quarry makes for some unusual scenery, reminiscent of a proper canyon. It is popular with filmmakers, from Czechia and abroad. 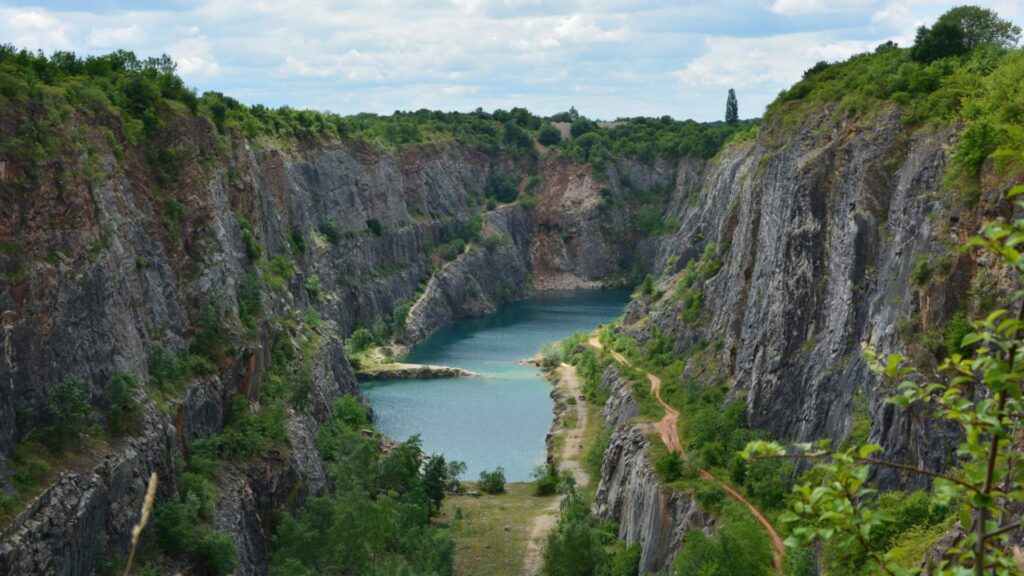