Discover Czech Regions: Usti Region – Town of Krupka and its surroundings. Town of Krupka
is famous for its mining past, when tin, silver, tungsten, and fluoride were mined here. The local area was first settled early in the Bronze Age. The first record of mining tin dates back to the 10th century.

Cable car from Krupka to Komari vízka
The two-seat funicular began operating in 1952 as the second oldest hanging cable-way in Bohemia after the two-section funicular at Snezka Mountain. It is the longest passenger cable car track in Bohemia at 1.46 miles making it one of the longest single-section tracks in Central Europe. 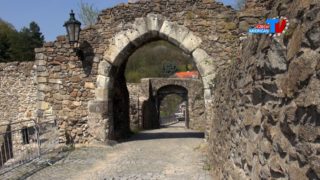 Krupka Castle also know as Ruzovy hradek (The Rose Castle) is credited to John of Bohemia in 1320 to strengthen the border fortifications in the border in the Saxony region. King John gave the castle, along with the town of Krupka, the tin mines and Trmice to the Meissen noble Thimoteus of Kolditzin in 1330.   J.W. Goethe visited the castle a number of times during his stays at Teplice spas.

Stary Martin Mine (Old Martin Mine) in Krupka
This mine was one of the most important mines in the Krupka district. Mining began in the 14th century and continued into the 1930s. The old Martin Mine had one of the richest and longest tin ore veins.

Czech Destinations: The Museum-Temple of Hops and Beer in Zatec. This museum is the largest of its kind in the world dedicated to hops and beer. Here visitors can follow the development of growing hops from the early Middle Ages to the present with the entertaining and educational displays that guide you through the world of beer in this Temple of Hops and Beer,

Czech Landmarks: Terezin is a former fortress built by the Enlightenment ruler Josef II and although the building named after his mother Maria Theresa was supposed to be used for defense, it paradoxically became infamous first of all as a prison, and later during World War II as a Jewish ghetto.

Special Report: Mount Rip has a very strong magnetic force due to the basalt with a high iron content making it highly magnetic. A compass here is completely out of order because of the magnetic anomaly according to the basalt magnetism and the magnetite.