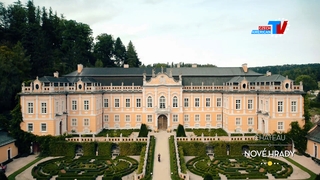 Czech Cities & Towns:  Town of Ceska Trebova  one of the largest in the region is in the foothills of The Eagle Mountains and on the boundary of
Bohemia – Moravia. It’s history dates back to 1278.

Special Report:  Jabkancova Fair in Ceska Trebova started in 1961 is a popular folk festival organized in the neighborhood of  St. Catherine’s rotunda is held in November before the feast of St. Catherine.

Czech Destinations: Town of Litomysl – the dominant feature of the city is the Italianate Renaissance castle with its more than eight thousand examples of sgrafitto, which has been on the UNESCO World Cultural and Heritage List since 1999. Litomysl is the birthplace of the composer Bedrich Smetana, whose name is commemorated by an annual opera festival.